The True Story of Pizza

The story of pizza is a long one. From the Greeks to the Egyptians, from the Persians to the Indians, there have been incarnations of pizza served throughout history. Flatbreads, naan, and plakountos are all early preparations that could be considered cousins to the modern pizza, but there isn’t a consensus as to which is first and whether these could even be considered precursors to pizza at all.

In reality, pizza was likely born in Naples, Italy decades after the tomato was first introduced to Europe. At the very least, this was likely the first use of the word “pizza.” Initially a dish for poor people, the original Neapolitan pizza was sold in the streets with a diverse range of toppings. The first Italian pizza restaurant, Antica Pizzeria Port’Alba, began baking pizzas in 1738 as the dish grew in popularity, especially with tourists visiting Naples.

Then, in 1889, modern pizza was born when pizzamaker Raffaele Esposito created the “Pizza Margherita” for the Queen consort of Italy, Margherita of Savoy. It contained only tomatoes, mozzarella, and basil to represent the colors of the Italian flag.

The Story of Pizza in the United States

Pizza’s journey in the United States began with Italian immigrants in New York. In what is now known as Little Italy, Gennaro Lombardi opened the first pizzeria in 1905. Made in the classic New York style using a coal oven and thin crust, Lombardi began the entire lineage of NYC pizza. Eventually, pizzamakers trained at Lombardi’s began to spread across the city and open up second generation facilities, which still flourish to this day – Totonno’s in Brooklyn in 1924, John’s of Bleecker Street in 1929, and others.

Pizza also flourished in other cities, and it began to expand beyond its Italian roots. In Chicago following World War II, Ike Sewell, a Texan living in Chicago, invented a deep-dish style pizza at Pizzeria Uno. Like Lombardi’s pies in New York, the new style spread across the city of Chicago.

In the late 20th century, California invented its own style. In what could be viewed as a return to the pre-modern pizza styles of 16th century Naples, toppings varied and included ingredients like goat cheese, truffles, artichokes, and other vegetables for a “healthier”, California style. These new pies were the invention of Ed LaDou, who was hired by Wolfgang Puck to make pizzas at his new restaurant, Spago. In the mid 80s, LaDou left Spago when he became a minority partner in California Pizza Kitchen, where his barbecue chicken pizza became famous.

In Conclusion: The Last Slice

No matter where your pizza allegiances lie, pizza is one of the most widely consumed meals in the United States. And the equipment used to create pizza has just as much impact as the ingredients used in terms of producing a quality pie.

Learn more about the right pizza equipment for your foodservice operation.

Every pizzeria needs a specialized set of solutions. Even home pizza chefs need different pizza equipment. Get inspired by looking at the Alto-Hartley Guide to Pizza Equipment today. 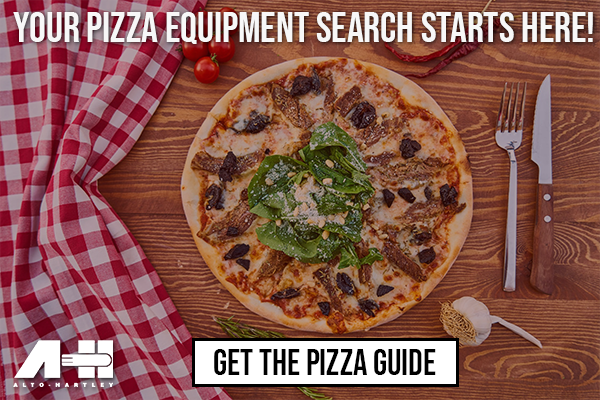